Getting some updates done.
All new publication list is online.
Updated my conference presentations.
Will fill in the details soon!


New projekt - funded by the Austrian national bank - started in March 2014. Officially my part will start in coming october. It will be funny to see this come together!  (And yes I'm already working on it)

The project on foreign corrspendents led to a publication in this nice upcoming book:

In July I'll be at Tampere for the ACS Crossroads and Yokohama für the ISA worldcongress :)

A new kind of post... a short statement about myself. (German Prosa)

Because the science guys have a problem to understand science...

In my discussions with friends working in physics or IT it often comes to the point where we  realize that the people working in the hard sciences have a problem to understand how social sciences work...

and add a dash of

Jeffrey C. Alexander's essay on the centrality of the classics found in the 1987 edition of Social Theory Today
Posted by Pop-Culture-Sociologist at 12:40 PM No comments: 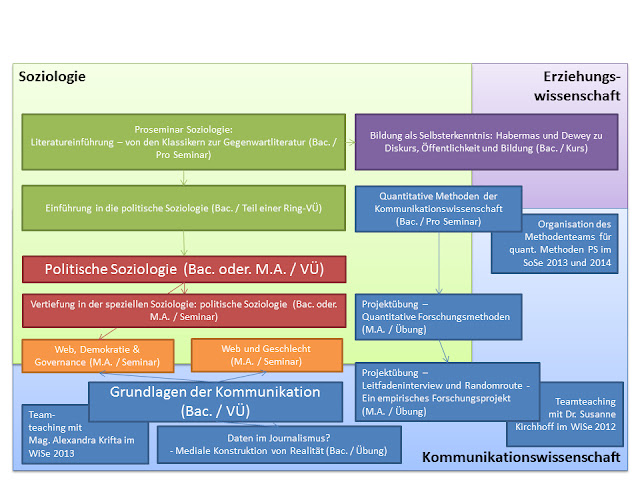 Here is an overview regarding my teaching experience. It gives a good overview over my core competences as well as my interests in research and teaching.

Okay in the last few month I was working hard to secure funding for a research project. As it is still unclear, if the proposal will go through I do a updte on a few publications that may be of interest:

It is about the results of our departments 2010/2011 research project on living conditions of Austrian Journalists.

This is closly related to a secondly a paper based on the projects I have completed with Roman Hummel and Susanne Kirchhoff has been published in the new "Journal of Applied Journalism & Media Studies".

Changes in media, changes in the profession? The shifts of the journalistic field as a challenge for young Austrian journalists

Mainly about working conditions of journalists in Austria, who view their job as a creative profession with little need for formal education, and insist on the importance of personal networks. Despite this, the younger and female journalists are more likely to educate themselves in hopes of finding a permanent job. It was written by Susanne and myself, with valuable input from project leader Roman Hummel.

And going hand in hand with those:

Here is the link to the paper on the percieved value of Education in the Austrian journalism landscape. It was originally presented at the third World Journalism Education Congress, which was held earlier this summer in Mechelen, Belgium. The conferencepaper was reviewed and the article is available online at the conference site - or here:

Which Education for Which Journalism under Which Circumstances?


Posted by Pop-Culture-Sociologist at 5:40 PM No comments:

Another round of Updates

Okay did some huge updates to the blog.
There are new papers to be found, information on new publications and my teaching etc.

Take a look around!

Cheers,
Dimitri
Posted by Pop-Culture-Sociologist at 5:36 PM No comments:

After serveral months of social network abstinence I updated my LinkedIn-Profile... :)
Posted by Pop-Culture-Sociologist at 10:17 AM 2 comments:

I should do some advertising for the upcoming Momentum congress and I got an AWESOME package of poster and information material :)

Thanks to the organizing Committee for being so fast!

The topic of this year is PROGRESS and that is one interesting issue, in our current societal and economic climate!

Posted by Pop-Culture-Sociologist at 9:34 AM No comments:

Updated the blog a bit.

Small update of the blog.
Trying to keep up with my schedule!


Posted by Pop-Culture-Sociologist at 9:44 AM No comments:

Okay my dissertation is progressing and the first 10 days lead to 573 datasets!

YES - already passed the minimum number of completed datasets I needed for my thesis, and already past the halfway point of a good large data set ;)

Thanks to the Johannes Kepler University Linz and Paris Lodron University Salzburg!
Posted by Pop-Culture-Sociologist at 1:54 PM No comments:

Pop-Culture-Sociologist
Salzburg (City), Salzburg, Austria
pop.culture.sociology - This blog shall reflect my interest in sociology, communication science and global pop culture. You will find posts about the social sciences as well as comments on movies, comics, music or gadgets. I own a M.A. in sociology and I am currently working on my Ph.D., which will is interdisciplinary, having strong ties to both communication sciences and sociolgy.